Foxes are naturally skittish critters and will typically run or hide from people.

There are four species of foxes native to Colorado. They are the Red (Vulpes vulpes), Kit (V. macrotis), Swift (V. velox), and Gray fox (Urocyon cinereoargenteus). The red and gray fox are far more common in Southwest Colorado.

Red foxes adapt to most habitats within their range, but usually prefer open country with moderate cover. Gray foxes prefer a more dense cover. The ranges of these animals are often limited by coyotes and wolves, which sometimes kill them.

Foxes are mostly solitary creatures except during the winter breeding season through midsummer when mates are raising their young.

Red foxes may dig their own den or use abandoned burrows. The same dens are often used for several generations. Gray foxes often create dens in woodpiles, rocky outcrops, or hollow trees.

As carnivores, a fox’s diet consists mainly of rabbits, mice, birds, and eggs. They do sometimes eat fruits and insects as well. A fox will usually kill prey that is smaller than a rabbit but is also known to kill and eat raccoons, fawns, piglets, lambs, and poultry.

Foxes can carry diseases such as rabies 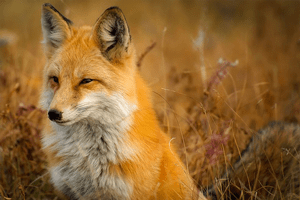 While they are often harmless, a fox can cause damage to your property and wreak havoc on small livestock. They are also known to carry diseases such as rabies, which can be spread to you or your pets if bitten.

Please don’t put yourself at risk by handling a pesky fox on your own. If you are dealing with a fox issue on your residential or commercial property in Colorado, we can help!

San Juan Wildlife Services strives to take care of any wildlife issues in a way that is humane, safe, and effective. We will remove your problem fox using live trapping and relocation.

Contact us today for a quote or immediate removal and services dealing with foxes.

Southwest Colorado Residents: Get a Free Quote for Fox Removal and Control

Check Out What Our Clients Are Saying
“Tom Hayes of San Juan Wildlife Services is great to work with! He is incredibly responsive, professional, and easy to work with. He responded in a timely fashion and offered same-day services. We plan to use him in the future and would highly recommend him to others!”

“Tom is wonderful to work with and super knowledgeable about the best, most efficient, and most importantly HUMANE ways to remove unwanted critters from your property.”

“Tom Hayes was fantastic to work with and I would recommend him to anyone for animal control in the Four Corners. Thanks Tom!”