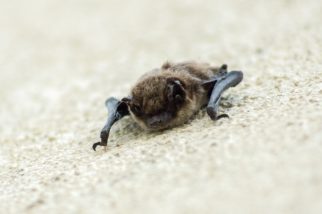 Bats(Chiroptera) are the second largest order of mammals and are widely dispersed across six continents. There are eighteen species known to live in Colorado. One of the most commonly seen is the big brown bat, which stays here year-round. Other species migrate through the state.

Bats play a vital role in the ecosystem through insect pest consumption, plant pollination, and seed dispersal. A colony of bats can consume an unimaginable amount of insects in a small amount of time. For example, Colorado Parks & Wildlife relays, “Little brown bats have been known to catch and eat more than 150 mosquitoes and crop pests in less than 15 minutes.”

The ability to consume large quantities of insects (up to 50% of their body weight) every night makes the bat an important accomplice to farmers. Bats are known to reduce crop damage and limit the need for pesticides.

Unfortunately, bats evoke a lot of fear in people. This is often the result of harmful myths and misconceptions. Bats, like most other wildlife, prefer to avoid contact with humans and will not attack unprovoked. When a healthy bat is left alone, it does not pose a threat to humans.

That being said, it is important to know that bats can transmit rabies – a viral infection of the nervous system that only occurs in mammals. Though rabies is dangerous and almost always deadly if left untreated, it is preventable through medical care. The potential for bats to carry rabies does not mean they should be killed out of fear. According to Colorado Parks & Wildlife, “Studies [suggest] that less than 1 percent of all bats may be infected.”

If you find a bat roosting near your home during the daytime, leave it alone. This is not always abnormal behavior. Sometimes young or migrating bats will roost temporarily in a fairly open space.

On the other hand, if you find a bat in your home, you should leave the space and call your local wildlife removal professionals. The bat may not be rabid, but it is better to be safe. These animals should never be handled, dead or alive, by anyone without proper training and equipment.

Rabies in Bats: Behavior to Lookout For

Other symptoms rabid bats may exhibit include, appearing disoriented, wandering aimlessly, inability to fly, or lying on the ground.

Due to the nature of bat bites, which are small and can go unnoticed, evaluating exposure to rabid bats is different than other mammals. It is better to consider yourself exposed and seek treatment if you have come in direct contact and cannot rule out a bite or have been in an enclosed space with a bat where the level of contact is uncertain (a bat in your room while you were sleeping).

Protecting Yourself and Your Family

I hope I do not sound contradictory after telling you not to fear bats, then proceeding to talk about rabies. My wish is to equip you with the knowledge you need to protect yourself, while also easing misguided fear surrounding these incredible creatures.

Rabies is avoidable, especially if you follow these few simple steps:

With a little extra knowledge and precaution, humans and bats can coexist. After all, these creatures keep the ecosystem healthy and insect populations in check. This, in turn, benefits our farmers and our food supplies.

Bat conservation is more important now than ever. Between habitat loss and diseases, such as white-nose syndrome, bat populations have taken a toll. One way we can help protect these vital mammals, while also not having to live under the same roof, is through supporting humane removal.

Life Cycle of a Bat